There has been persistent chatter within the industry that Realme is working on its first phone with an under-display camera for some time now. In fact, back in September, Realme VP Xu Qi Chase posted an image of a smartphone on Weibo that has no notch or a punch hole for the selfie camera, and he clarified in the post’s comments that the device doesn’t come with a pop-up mechanism either, meaning it is using under-display camera tech. In our recent interview with Realme’s Madhav Sheth the pop-up selfie tech was also mentioned as pretty unlikely to make a return.

In a new development, a few wireframe diagrams have now surfaced from a recent patent filing by Realme. These also show a device with no obvious spot for a selfie camera to fit, which strongly suggests an under-display selfie. Of course, there is no guarantee that the design showcased in these images is in any way indicative of the actual design of a future Realme phone. Still, the camera island certainly has a familiar look to it. With a trio of snappers and an LED flash to the side. 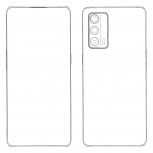 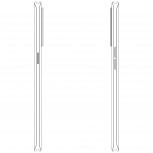 As far as some other details we can discern from the drawings – a curve can clearly be seen on both sides of the phone – display and back. Some antenna lines are obviously marked-out on the top and bottom frames, which hint that it will be made of metal. So, this is more than likely a premium model. We can also spot separate volume buttons on the left-hand side and a slim power button on the right. No large fingerprint reader combo, which means that we can expect an under-display reader. Finally, it appears that the bottom of the device will house the SIM card tray and a USB Type-C port. No surprises there.

Hopefully, this means that an actual Realme phone with an under-display camera is inching closer and closer to and official release.